Young-tak probably needs no introductions as it has quickly swept Korea over the last year or so. It smells like it will be quite sour but it’s actually surprising quite sweet. It is a really smooth makgeolli to drink and like a Jangsoo or a Saengtak is a multiple bottle rice wine that you could definitely drink several of over a session. They interestingly started off with clear bottles but seem to have joined others like Jipyeong and switched to white PET, the reason for this is to allow the bottles to be reused several times..yeah I know!!! 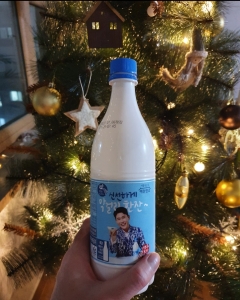 Young-tak was basically created after a contestant on the Chosun TV program Mr.Trot won one of the rounds by copying an old Trot song called ‘Makgeolli Hanjang’. He went on to finish 2nd in the competition, became an overnight superstar and thus the makgeolli was born. When it was first launched you could only buy it via the brewery’s website which was either the greatest Marketing in history or a complete oversight as to how popular it would become. It’s now available in most supermarkets and convenience stores which is kind of a shame as it has now lost a little of its elusiveness and its mystery.