If the staple food of a Korean company dinner is kimchi then the staple beer is almost certainly Cass Fresh. As ubiquitous as chips on a British plate, few BBQ tables are short of a blue label or two. Promoted by such famous faces as Lee Hyori, BlackPink and Big Bang it is probably one of Korea’s most iconic beers. It even managed to capture the attention of Scotland’s very own ‘foul-mouthed’ chef Gordon Ramsay (no joke) who, in 2018, seemed to be on a continual loop of television stations pretending to enjoy one of Oriental Brewery’s finest. 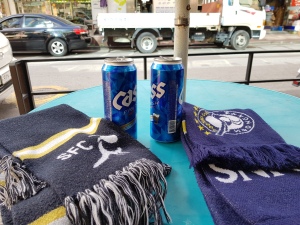